We sat down to talk with Darnell Adams, Director of Community Initiatives at the Gilbert Family Foundation. Darnell talks about his passion for the work, and gives insight into what he sees as the biggest barriers to housing stability in Detroit – and how we can work together with the community to create solutions. 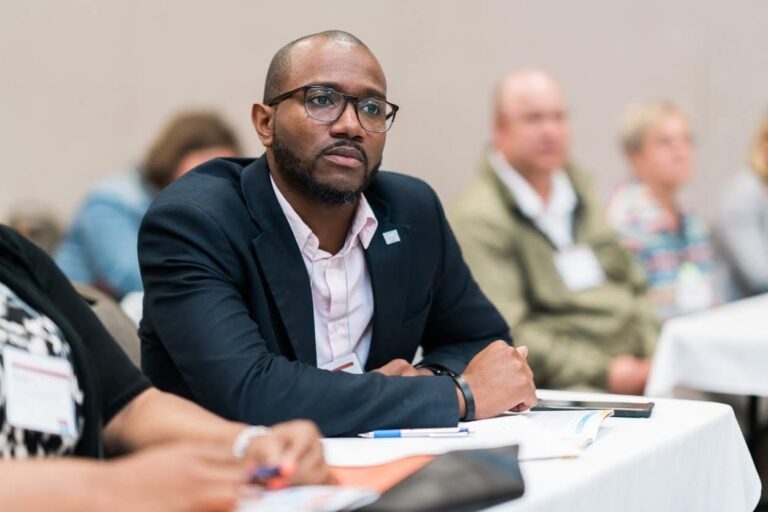 Darnell Adams: I was drawn to this role for a lot of reasons. Back in 2012, as a community organizer for Warren Conner Development Coalition, I watched nonprofits struggle to meet their mission for both the community and their funders. Often, nonprofits stray from their mission to secure operating and programmatic funds. When they do, it creates strain on the organization and its staff. Seeing this play out, I set a goal to end up on the other side of the table and deploy dollars to nonprofits from a philanthropic position.

When this role was announced, I received texts and emails from several friends and colleagues who felt I could take on this tremendous opportunity. When I saw the position, I immediately thought back to my goal from 2012. Over the last ten years, I have continued to immerse myself in grassroots organizations throughout Detroit because they were working closest to the people who need assistance and the systems affecting Detroiters. I have worked in the nonprofit, public, and private sectors, and I can see the communication gaps between them. Each industry wants to see Detroit succeed, but they struggle to speak the same language. I hope to be the interpreter and help bridge the work between the sectors.

My goal is to empower these organizations with the resources they need to make a lasting, equitable impact on their communities and break the silos that we all work within. Ultimately, I was drawn to this role because I know many of the barriers to economic opportunity and stability for Detroiters and this will give me a chance to explore solutions to break them.

GFF: How have your previous roles shaped how you approach housing instability?

DA: My work over the last ten years has focused on the built environment of Detroit neighborhoods. From the Lower Eastside Action Plan and Walking Against Blight initiatives at Warren Conner Development Coalition to my most recent work with the Strategic Neighborhood Fund at Invest Detroit, I was gifted the privilege of seeing the many systems that directly impact housing in Detroit.

I have used many tools to inform my approach to housing instability. The essential tools come from listening to those affected by the housing crisis, coupled with relevant statistical data, and rounded off with partners who work to mitigate the instability. To get at the root of any problem, you must work from the source. With housing, that means working with residents adversely affected by the institutions that make up the housing system. You must understand the resident experience and map it out to find the broken or missing tools that created their housing crisis. This mapping provides a baseline of information that can be used to advocate for change at the systems level.

GFF: Up until January of 2022, you were also a Human Rights Commissioner for the City of Detroit. How has that role affected your work, or the way you view your community?

DA: While the commissioner role did not significantly impact the approach to my work, it did affect the way I view my community. As a commissioner, we discussed the EO-2021-2 compliance report, Detroit Means Business initiative, workforce development, equitable disability programs, and civil rights issues across our city at the Human Rights Commission meetings.

I learned that we have a lot of work to do as a city. Learning more about all these pillars helped confirm my belief that housing is foundational, but not the only variable to a healthy Detroit. Detroiters want safe public spaces for their families, good schools, quality grocery stores, and entertainment in their neighborhoods. When the threat of losing your home is removed, whether you’re at risk of tax foreclosure or eviction, it gives you room to breathe and assess your next step. That’s one of the biggest benefits of the Detroit Tax Relief Fund. Residents can take advantage of training programs or sign up for jobs through Detroit at Work to provide more economic stability for themselves.

We do not want to lose longtime residents to other cities. That means addressing the environment that residents live within. It is essential to show residents opportunities to grow a business, shop, live, and play safely in their neighborhoods. We must be intentional about building access to the tools that make this possible.

GFF: What are some of the biggest barriers to economic opportunity and stability for Detroiters, and how are you considering approaching them?

DA: There are many barriers to economic opportunity and stability for Detroiters, but from my perspective, two of the most significant obstacles for Detroiters are taxes and access to capital.

Detroit must change how it manages property taxes for residential and commercial properties, but for the purposes of this interview I will focus my answer on the residential barriers. The current residential tax model is inequitable for most taxpayers. It’s incomprehensible that residents who have no mortgage are losing their homes to property taxes. Detroit has some of the highest property taxes in the nation. Our city needs to be thoughtful, accessible, and equitable in collecting and educating its homeowners on property taxes. There are great programs like the Homeowners Property Exemption (HOPE) for income-eligible residents, but more work is needed. Some residents are experiencing the “cliff effect” and don’t qualify for many of these programs. We need property tax reform and a monthly payment system to collect residential property taxes to remove the burden of paying a lump sum bill every summer.

Detroit’s housing stock is about 85% single-family detached and 15% multi-family. The city has a 51% renter to 49% homeowner ratio based on a 2021 report from Crain’s Detroit. Many Detroit neighborhoods have barriers to homeownership because of perceived values, allowing investors to undercut the market by purchasing the home and creating a new rental unit, and sending the prospective homeowner to another community or city to realize their dream of owning a home. Detroit wants to get rid of these bad actors and focus on those who are meaningfully invested in the community.

Programs put on by the nonprofit Building Community Value Detroit and Capital Impact Partners work to teach Detroiters the basics of identification, acquisition, financing, leasing, and project management for neighborhood-based residential and commercial development projects. We want to see Detroiters build generational wealth using real estate while also improving their neighborhoods. The financing tools for this type of neighborhood development work are expensive, scarce, and inaccessible for many. Without tools to strengthen communities for acquisition rehab or homeownership due to low values, quality, affordable rentals will become rare, and affordable homes for ownership will continue to be converted into rentals.

GFF: You’ve said that playing the worldbuilding computer game “Sim City” as a child had a big impact on your career trajectory. Can you elaborate?

DA: Like many urban planners, I loved playing games from the SimCity franchise. I enjoyed watching my gaming decisions inform the virtual landscape of cities. My favorite SimCity game is SimCity 4 Deluxe Edition. The game has many city assets such as parks, roadways, parking decks, trains, ports, beaches, cemeteries, industrial, residential, and commercial density tiers, different types of utilities, schools, hospitals, and so much more. It allowed you to create any city, but it came with budget constraints. You had to slowly grow a city and build enough capital to bring all the great amenities like schools, parks, hospitals, police stations, and more to neighborhoods throughout the game. You could see how communities suffered if they did not have a good school, parks, roads, businesses, transportation like bus or train stops. It was an excellent exercise to understand the complexity of cities and how they might function.

There were obvious gaps in the game compared to the real world. Like, one person doesn’t make all the decisions in the real world! There was also no way to create new taxes or identify new revenue streams like a gas tax to improve roads. The game taught me that the economics of a city is fundamental to its growth. Without a solid long-term revenue base, a city can find itself in trouble.