What’s Next for Detroit Entrepreneurs? Venture 313 Plans Ahead

Detroit has often been called the city of hustle, grit and determination – a motto that characterizes in part what entrepreneurs here need in order to succeed. But when it comes to building scalable, innovative startups in the largest majority-Black city in the country, hustle and determination can only get entrepreneurs so far – especially without the resources needed to bring their dreams to fruition. This is by far the biggest obstacle to aspiring entrepreneurs, and lack of capital has prevented many Detroiters from executing their ideas.

“When we analyzed our past investments and listen to our partners who do this work every day, the data kept screaming loud and clear that the exacerbated effects of the racial wealth gap was preventing Detroiters from having the necessary capital and encouragement to take big risks, particularly at what we often call the ‘friends and family round” of startup growth.”

The question Feagin grappled with: How can we get more Detroit founders in the game?

The only way for Detroiters to truly participate the innovation economy would require deploying a level of support previously unheard of, especially for early-stage entrepreneurs. “We saw from the success of Demo Day that when we bet on Detroit founders, it pays off, and that we needed to help scale the amount of opportunity available. We know that if were really going to level the playing field, we’ve got to start by intervening where the real wealth is created.”

The Evolution: From Detroit Demo Day to Venture 313

Venture 313 came about as a next phase solution to the popular annual pitch competition, Rocket Mortgage Detroit Demo Day. Launched in 2017, Detroit Demo Day was conceived as an annual single-day event, with hundreds of competing businesses vying for a portion of $1M in funding as well as networking opportunities. Many Detroit Demo Day winners have seen their success amplified: Yelitsa Jean-Charles, creator of Healthy Roots Dolls is one example. Her dolls are now sold nationwide in Target and she has made headlines for her equitable approach to the toy industry. Cynthia Davis, owner of Cyntsational Popcorn, was also able to explore lucrative business opportunities including the opening of a brick-and-mortar store, a food truck, and the chance to test a new market when Rocket Companies sent her popcorn to over 25,000 Rocket Companies team members during the organization’s 35th anniversary.

Over the past five years, Detroit Demo Day shifted to meet new challenges for business owners. The funding categories evolved to adapt to the growing changes of the marketplace – especially during the pandemic, as many entrepreneurs were forced to pivot their strategies. But the Economic Mobility team realized that entrepreneurs needed more. 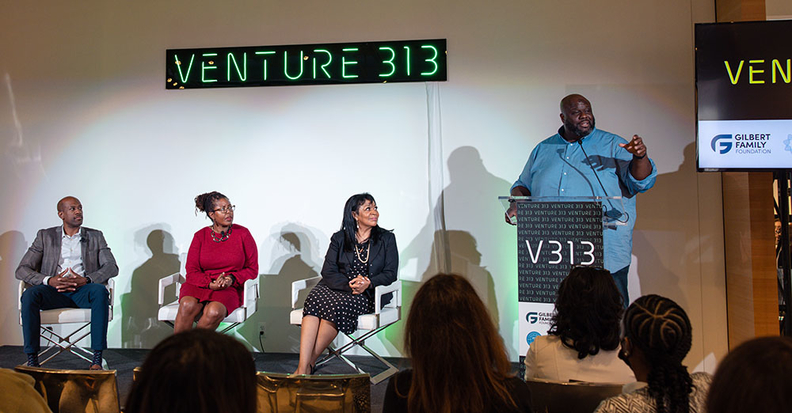 “We successfully celebrated the success of Detroit Demo Day, and pivoted to what’s next,” said Feagin. “We knew we needed to create the next phase in a way that builds on what we learned and solves the problem of today. Startups need talent. Founders need capital, mentorship, and an environment that encourages them to take risks.” That’s where the Gilbert Family Foundation is different, Feagin said. No other philanthropic organization was ready to make such a deep commitment to entrepreneurs so early. Now, Feagin had the green light to create an innovative program that would support entrepreneurs at every stage of their journey, introducing Detroiters to the philosophy that drives the Gilbert Family Foundation: You’ll see it when you believe it.

“There is an unspoken acknowledgement that launching and growing a business is really hard work,” agreed Brandi Brown, Economic Mobility Program Manager. “It’s not a muscle we use every day. When you are new to navigating in this space, it’s scary to not know if you are making the best moves.”

Together with Feagin, the two set about building the evolution of the Detroit Demo Day experience. They kept their focus on getting Detroiters in the game, to disrupt the racial wealth gap with a deep investment and wraparound supportive resources to help budding entrepreneurs develop their ideas, and to offer those who have already started their businesses with additional support to ensure they were able to grow.   Feagin and Brown knew that they would need to create something so disruptive and impactful that it would drive more entrepreneurs to launch their ideas, ultimately generating more wealth by eliminating some of the risk associated with starting a business. And so Venture 313 was bornpart grant funding, part program, part networking experience – all coordinated through a “Playbook” experience that users could register for on the Venture 313 site.

The Playbook was developed with TheStartup.com as a way to receive guidance and resources as well as partner matching based on their specific entrepreneurial journey. To date, three Playbooks have been launched, and there are multiple ways to build tailored experiences. This is in keeping with the reality of the entrepreneurial journey, which is multifaceted and ever-changing.

“All venture funding is risk, but sometimes with limited resources, funders are less apt to make bets on folks who don’t ‘fit the mold’,” said Feagin. “We must create new space for new ideas to flourish.” Thus far, the Venture 313 platform has seen 262 unique engagements with a playbook, including creating a profile and taking next steps to move their venture down the pipeline. 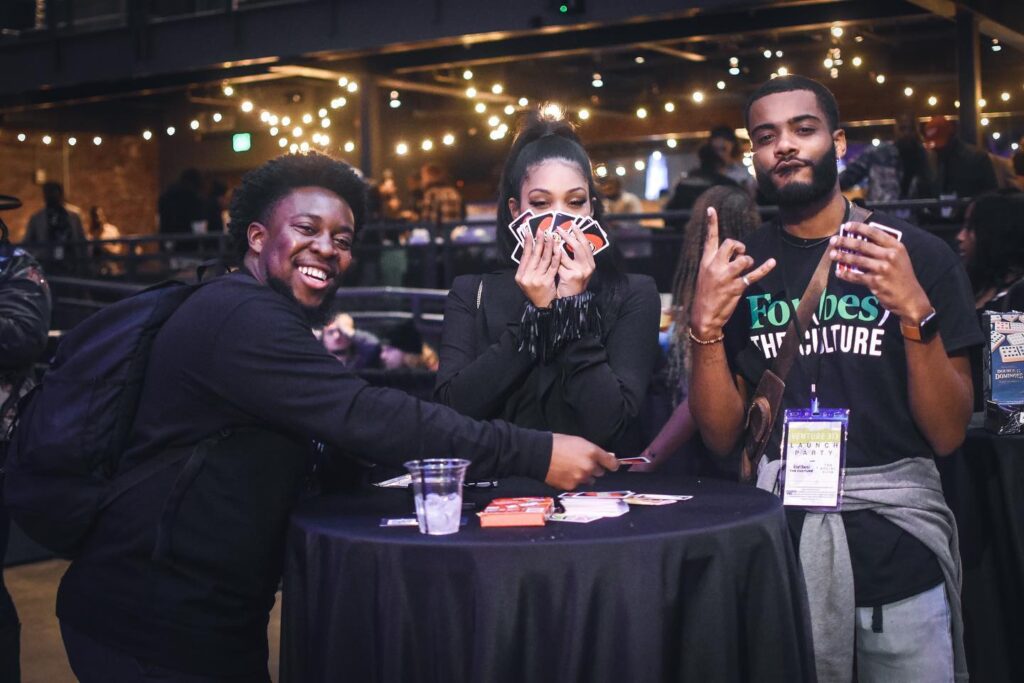 Launch party attendees enjoying the festivities with a fun game of Uno as they celebrate Venture 313. Photo Credit: Forbes The Culture (Facebook).

A Venture 313 Launch Party to Remember

The Venture 313 launch party turned out to be much more than just a fun, one-day event: it was a week-long celebration of impact. The main event featured Sebastian Jackson, founder and CEO of The Social Club ,a barbershop cultivating the traditions of barbershop culture with a modern twist. Jackson is also a 2017 Detroit Demo Day alumnus and has remained connected to the Economic Mobility team ever since. At the Venture 313 Launch Party, he led a special edition of his barbershop interview series Shop Talk, featuring Co-Founder and Co-CEO of Loop, John Henry. This special edition Shop Talk was co-sponsored by For(bes) the Culture, an offshoot of Forbes focused on creating equitable pathways for Black and Brown professionals. Entrepreneurs were invited to come and listen and learn more about the platform, and several Detroit Demo Day alumni were in attendance.

That same week, the Forbes 30 Under 30 Summit took place in Detroit, bringing brilliant Forbes “listers” from across the globe to connect and be inspired. During the summit, Forbes hosted a special Service Day where global 30 Under 30 listers worked with entrepreneurs to provide consultation and support for a mini pitch-competition. Five participants pitched their businesses on stage to a panel of participants. Among them was Karissma Yve, 2021 Detroit Demo Day alumna and owner of Gildform, a jewelry manufacturing platform utilizing 3D printing to create and ship custom jewelry. Karissma won the pitch competition, earning a custom full-page ad in the 30 Under 30 edition of Forbes Magazine. The Gilbert Family Foundation was also the presenting sponsor of Techtown’s annual fundraiser, Toast of the Town. 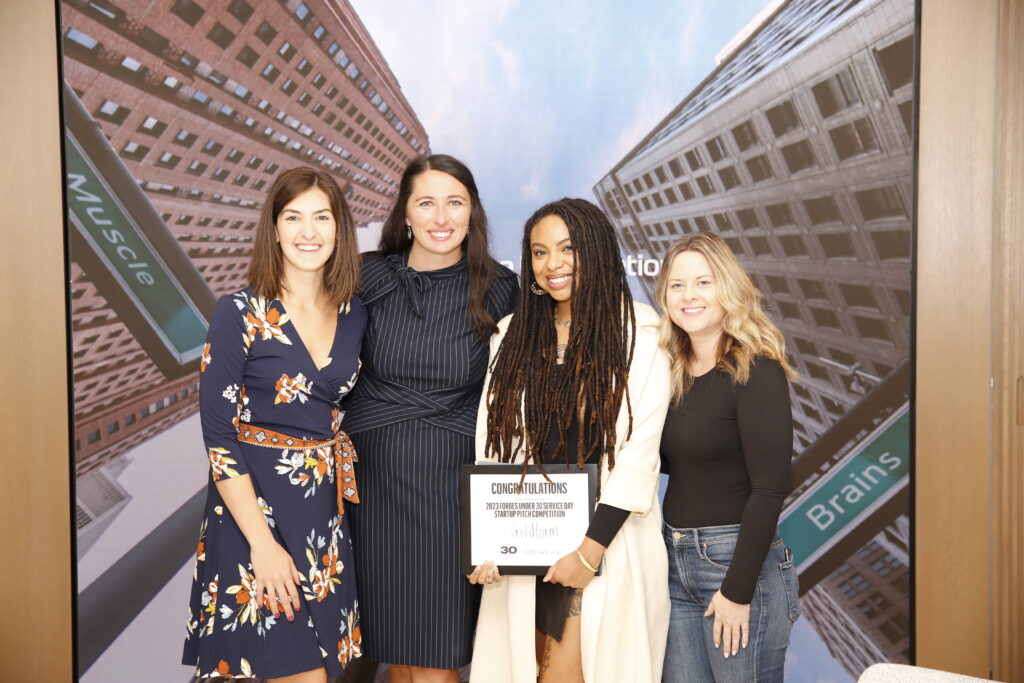 Now that Venture 313 has launched, Feagin and Brown are looking ahead to the future. They have already gathered feedback from current V313 participants to identify areas for growth.

“We’re going to be intentionally focused on expanding the ecosystem content to help Founders understand the complicated world of entrepreneurship,” said Brown. Feagin added, “We also want to expose more Detroiters to this concept of what it means to be a high-growth venture, and help them internalize that yes, it is possible for them.”

Over the next few months, the team plans to launch a new “My Venture” dashboard feature that will enable Founders to manage their individual ventures, generate customized asset documents and learn about the essentials required for each stage of their business. Caleb Conley, a Detroit native and Venture For America alumnus, was recently hired on as a Venture 313 Community Manager to oversee founder journey through the program. And perhaps most exciting of all, capital will start reaching the participating businesses in the first quarter of 2023.

Yet as Brown said, some of the biggest impact of Venture 313 can’t be measured – yet. “I am most proud of the momentum I see building within Detroit’s entrepreneurship community,” she said. Feagin shares this enthusiasm and is hopeful that Venture 313 will generate a new entrepreneurial ecosystem, stronger and better than ever before.

“Venture 313 is all about more opportunity and accelerated wealth creation for Detroiters,” he said. “This platform is about providing more onramps, removing barriers, and allowing more of us to be innovators and dream big.” Ultimately, Venture 313 was created to help more talented Detroiters pursue their dreams of entrepreneurship – right here at home.

Thinking about launching your own venture? If you’re a Detroiter interested in starting or scaling your business – or you have a business idea you want to explore – visit Venture 313 to learn more.